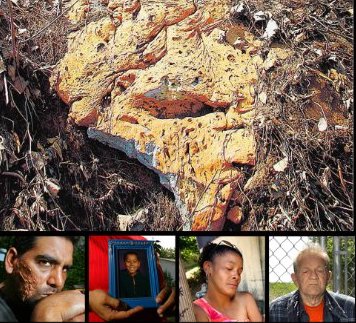 The Turtle Clan’s core community in Ringwood, New Jersey lives on a Federal superfund site. We didn’t dump it on ourselves.

The town of Ringwood and the state of New Jersey gave the Ford Motor Company permission to dump 256 million pounds of paint sludge around our homes and sacred mountains in the 1960s. That toxic waste has been killing us for almost 60 years and no one will accept responsibility to clean it up.

The Ramapough Culture and Land Foundation works to ensure that the town, state, and federal governments actually help our people and finally clean up the devastating mess they created.

We’re the native people of New Jersey, the original inhabitants. We have been living in these mountains for over 11,000 years. It is our inherent responsibility to protect this land even though we are sick and still dying to this day.

This issue doesn’t only affect the Ramapough. It affects the millions of people who rely on the Wanaque Reservoir. Ford Motor Company’s toxic dumping is one of the largest environmental crimes and cover-ups ever. It needs to be addressed and someone needs to be held accountable.

Back in the mid-1960s Ford Motor company bought the area which we call home. At the time there were approximately 1,100 Ramapough Turtle Clan members living there. Ford bought our ancestral land for executive housing and a self-contained community for the motor plant in Mahwah, NJ. When they lost their bid to do that, almost immediately, they started to dump toxic waste from the plant into our community, onto the land, on the roads, in the brooks, in the mines. This was all unbeknownst to us – we didn’t know what that was and we didn’t have a voice.

That dumping led to fires that raged on for weeks on end. At one time you could see the orange glow of the fires from Manhattan. Yet, neither the state, nor the town, nor the county, nor the federal government came to get our people out of there. They actually stayed there through that whole time. Some houses were probably less than 100 yards from the fires, which when they burned created dioxins, Agent Orange. Our people were getting sick and dying, and finally we started reaching out trying to find answers.

After years of denials and evasions, recently recovered documents confirm what the Ramapough people have long known: Ringwood Mayor John Kulik asked Ford Motor Company to dump paint sludge on us and the New Jersey Department of Environmental Protection gave them permission to do it.

None of this should have been legal. The Hewitt family deeds for the lands in question clearly prohibit dumping and require any existing waste to be removed. Nevertheless, the town of Ringwood and the state of New Jersey let Ford Motor Company poison the Ramapough people – a profound human rights violation that no one has sufficiently accepted responsibility for or addressed.

The U.S. Department of Environmental Protection claimed they had cleaned up the site in 1994, but that was not true. When we were delisted we were essentially given a death sentence, being told it was safe to go back out and hunt, and fish, and live there.

Environmental investigative reporter Jan Barry from The Record began a multi-part investigative series called “Toxic Legacy.” Through his championing of our fight, and others who have helped us along, after 12 years we got the Ringwood Mines re-listed as a Superfund site because it wasn’t clean. It’s the only site they ever had to list twice.

Even after getting re-listed as a Superfund site there isn’t assistance from the state, the town, or the federal government for our people. The only people we have to turn to would be the court system, as explained in the HBO documentary Mann v. Ford, but we don’t have the funds for all that litigation. So, most of the Turtle Clan continues to live and die on a Superfund site and still pay taxes to the town on houses that have zero value.

They can do this to us because we don’t have a voice. That is in part a result of the Federal government not recognizing our tribe. You would think that being a state-recognized tribe and the mere fact that we are human beings living in the state of New Jersey that somebody would come and try to rescue us. But you would be wrong. That still hasn’t happened. It’s been over 50 years. Instead, New Jersey and the Federal government now are trying to leave all this stuff in place and cap it, even though they promised otherwise for decades.

There are a lot of things that can be done to give our people a chance to heal. Many of us are already marked. The only thing that will benefit us would be knowing that our children’s children’s children, seven generations out, will be able to live healthy long lives again – a hope that has been stripped from us.

The land on the other side of Tranquility Ridge was once called Beech Farm and is now owned by the county. That is 2,500-4,500 acres of land our people could move to because New Jersey can not and will not clean the land they let Ford Motor Company poison in Ridgewood. We should be afforded the ability to recover our health, repair our community, and restore our cultural ways.

There’s also a darker future if we don’t act. We sit at the head of a reservoir that feeds 6 million people with water a day. What happens if the government doesn’t remove the toxic waste and we have an earthquake on the Ramapough fault that cracks one of the mines? Where is water for 6 million people going to come from or will the government let everyone else be poisoned like they let us be poisoned?

Donate to the Ramapough Culture and Land Foundation